So much can happen in 8 days. After sneaking out to a party with her friends, 16-year-old Amber Stevens goes missing. Forced into the world of sex trafficking, her family and community fight to get her back. The 8 Days Movement The 8 DAYS movement is about raising awareness and stopping the crime of child sex trafficking. The 8 DAYS film is a not-for-profit feature film drama inspired by actual events. Thousands of movie-goers attended the Red Carpet Premieres of 8 DAYS, incr

Pantheon's founders Eric & Elizabeth Schick, and their twin sons who are part of the film cast, attended the LA Premiere of the 8 Days Movie at The Grove in Los Angeles, CA on Sept. 9, 2014. Over 800 movie-goers showed up to support this feature film made to raise public awareness regarding the prevalent and growing crime of domestic sex trafficking in the U.S. All proceeds raised from the LA Premiere go to the non-profit organization Justice Speaks (justicespeaks.org). #eve

The Pantheon team was blessed with pure joy as laughter permeated our conference room while wrapping Christmas Gifts for families in need living at IHC. Six huge boxes of Christmas wish items, including some surprises, were delivered just in time for their Friday Fun Day. Christmas is always a time of giving and the generosity that flows is a perfect example of what it means to bless someone. Pantheon would like to thank everyone who donated. #event

On April 4th & 5th 2014, Pantheon worked alongside nearly 1,200 other volunteers serving at the 6 Stones CPR Blitz in the Mid-Cities Area. The event was a huge success and 6 Stones expressed how grateful they were for the Pantheon Team's help. Over the years, Pantheon has donated porcelain tile to help revitalize the homes of those in need through the 6 Stones Mission Network. This was the first event where Pantheon was able to not only donate materials, but also ourselves b

Interfaith Housing Coalition has two properties with a combined 49 apartments and facilities to care for families in need. Almost every weekend there are needs to be met by volunteers. Pantheon's service weekend consisted of two teams; the first team for landscaping duties and the second to assist in furnishing two apartments. The landscaping team helped with pulling weeds, relocating rocks, creating flower beds, repairing bed barriers and trimming plants. The second team hel

Tracey's Philanthropic Week was spent working with OurCalling in their mission to serve the homeless. Each day is a new opportunity to bring hope at OurCalling, and volunteers are involved in many different ways. During Tracey's volunteer time, she was able to help with many of the different tasks that OurCalling needs help with on a weekly basis. Tracey organized the resource warehouse getting new clothes donations into their proper places; cleaned up after meal services; 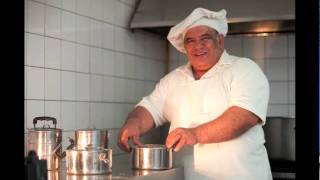